Choose your Greenspace from the map

Green Tier Creek reserve is 120 hectares of Australian bush on a hilltop near the east coast of Tasmania. It is named after one of the creeks in the surrounding valleys.

The land was chosen after extensive consultation with the Tasmanian Land Conservancy.

Green Tier Creek is home to quite a lot of native animals. Some of these are endangered due to loss of habitat. Wallabies, pademelons, eagles, Tasmanian devils and quolls have all been confirmed to live there. See below for more details and photos.

The Tasmanian devil is endangered. They are the largest carnivorous marsupial on earth, and have the strongest bite per body weight of all animals. They store excess fat in their tail, and have a fifth claw on the side of their front feet, which enables them to hold things.

Although wedge-tailed eagles are common on the Australian mainland, the Tasmanian sub-species (Aquila audax fleayi) is endangered, with only 200 breeding pairs estimated to remain. Three nests are directly adjacent to the property, and the eagles overfly the land. Disturbing the eagles can cause them to leave the nests and not return. A 500 meter exclusion zone is present around each nest and there are specific protocols for observing the nests.

Swift Parrots are a medium sized colorful bird. There are only about 2000 left. They nest in hollows in old trees, and their habitat is under threat. They've been clocked flying at 88km/h but even with this speed they are critically endangered.

The Swift Parrot can be found in south-eastern Australia. It is a migratory bird that only breeds in Tasmania and over winters on mainland Australia. The breeding range is largely restricted to the east of Tasmania within the range of the blue gum.

Tiger quolls are common in the area. These are a smaller-sized relative to the extinct Tasmanian Tiger.

There are also red-necked wallabies and pademelons on the property, and a great variety of bird life.

On the ridges, there are generally no mid-storey of trees below the main canopy. On the slopes there are smaller trees such as banksia (Banksia marginata), blackwood (Acacia melanoxylon), bull-oak (Allocasuarina littoralis) and native box (Bursaria spinosa).

On a smaller scale, there are many of the common local plants, but also less common ones such as the pink mountain berry (Leptecophylla juniperina), the guitar plant (Lomatia tinctoria) and the prickly beauty (Pultenaea juniperina).

There is much more information in the Nature Conservation Plan (PDF). 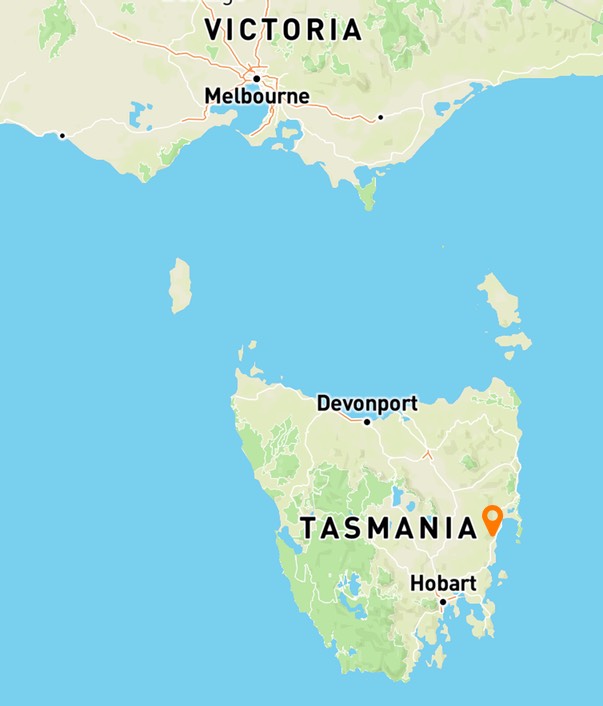